skip to main | skip to sidebar

Instilling some manners and respect

Yesterday I stopped by the barn with my husband to visit Ace. He hadn't seen him in awhile. I caught Ace and tied him to the wall briefly as, once again, I didn't have barn shoes on. When I turned him loose, he reared straight up as if to say "screw you... you stinky human.... you are NOT the boss of me." In fact, the past week, Ace's entire view of the world has been "screw you". Copy is in heat, and I don't know why some people are naive enough to assume that their yearling or two year old colt will not breed his mother, just because they are related. If I gave Ace a step stool, he'd get the job done today. Yes MA'AM ! On the drive home, my husband said... "you know, that rearing thing is going to have to stop." Well said.

Today was a rainy day, and thus devoted to Ace and his manners. Once I got him caught... not easy since he was busy playing "wild stallion"... I tied Copy and put a chain over Ace's nose for the first time ever. I also had a short riding whip in my hand butt up. Goal for today was "no biting... no striking... and NO rearing." Usually, Mom lets him hold the lead rope which makes him happy and keeps him from biting HER. But, first on today's list of rules was "no biting", and that included the shank.

Ace tried to grab the shank from me. I popped him with the chain. "OUCH, you meany, I'm not staying to play with you." Ace threw it into reverse.... Another **pop** with the chain. Ace's eyes got real wide, and if he had eyebrows, they would have shot up. "The humans have invented new equipment!" He is very very very smart. He immediately stopped to assess my demeanor, the new equipment, and to test out the ground rules. So as not to entice him into his rearing and striking behavior, I stayed back by his shoulder against him with my arm over his back stroking his other side. He reached around to try to bite me instead. **Crack** on the bridge of the nose with the butt of the crop. He didn't see that coming. In fact with the whip in the same hand as the shank, he couldn't really see me move at all, because I didn't want this to become a game which makes him head shy.

I led him off, and practiced "whoa". Again he tested me, but any missteps were met with a light tug on the chain, and any nips towards the shank or me were met with a tap on the snout. In about three minutes he had figured things out. I try not to reprimand with a "No" since that sounds too much like "Whoa". My reprimand is "Eh" or "Quit". We walked and whoaed. While we were whoaed, I touched him all over, and picked up all four feet. Ace stood quietly and respectfully for all of it. No nipping. No fidgeting. You could tell he was thinking hard, and his frequent pooping gave away his inner nervousness as he learned to cope with being attached to this "human with expectations".

I took him with me through the gate to the tack room to get a rope, and tied him to the arena wall for a bit while I talked to me step dad over the gate. He started to paw (his new trick). I stood about 4 feet behind him, and every time he lifted a front leg, I snapped his butt with the whip and told him "Quit!" He would lift a leg, and cock an ear to see if he was going to get away with it or not. Smart smart naughty colt. If my reaction wasn't quick enough **bang** on the wall. Then, because the rearing was so pronounced last time I turned him loose from the wall, I had left the shank on him draped over his shoulder, and when we were done tying, instead of turning him loose, we went for another walkabout on the shank. He was a reformed colt, walking politely, and standing soberly and still while I touched him all over.

So the problems start when you mess with his head (getting the lead snapped and unsnapped) and anytime you are standing in front of him. I did cross in front of him several times so I could repeat my handling on his off side. Anytime I got up by his head, reached between his front legs or touched his chest, he would start trying to nip again. Getting the chain off wasn't too hard. I reached under his chin and unsnapped it from the ring and worked it out of the halter while standing back by his shoulder, the butt of the whip in my left hand ready to rap his nose.

So, yesterday I was worried that I was the part owner of an incorrigible truant stallion, and today I am proud of my smart, trainable colt. As long as you lay down the ground rules, stay consistent, and ask and reprimand for the same things the same way every time, this horse training stuff isn't a problem. It sounds like a big task, I know. It is a huge responsibility to bring up a foal and turn him into a grown up, well trained, honest horse. But don't be fooled into thinking that it is any different when you are handling a trained adult horse. They are learning every day, and every time you handle them, you are teaching them something, be it good or bad. Just remember that.
Posted by SmartAlex at 4:39 PM 1 comment:

Today was a clipper lesson. This is by no means the first time he has seen clippers. Every time I clip Copy (every three weeks or so) I rub them on his shoulder and up and down his neck. I even managed to get a short bridle path clipped once when he was a few weeks old. He isn't afraid of the clippers, but in his view of the world, they share similar physical traits with biting or stinging insects, and low flying aircraft and therefore should not be allowed to get too close to his ears. For some reason, he feels the same way about me, and he certainly isn't afraid of me!

So, since his tying lesson had turned into a contest of how high he could paw up the wall, I decided he needed something to think about. First I just put my hand on his poll between his ears. That made him mad, and he tried a few times to take a good chunk out of my ribs. But, he knows he has to give in to that because I am a persistent and insistent human. He is always willing to test me to see if there is a chink in my human armor. After all, there may come a day when humans give in and allow him to continue on with his life doing only those things which seem pleasant and fun. Today was not one of those days.

After he resolved that I was allowed to put my hand between his ears (for today), I tried rubbing the clippers on his neck, then changing them from my free hand to the hand already resting on his poll. Mind you, the clippers are OFF... and cordless. But this still made him mad, and there was more squirming and biting. From there we progressed to him succumbing to me removing the clippers back to his shoulder, and turning them on and off. That is about where we usually leave off. If he will allow me to touch him with my hand holding the vibrating clippers, we call it a day. Today I was particularly determined and was able to touch the running clippers to his halter strap (which sort of cushions the vibration like my hand). At no point did I remove my hand from his poll. This took about 10 minutes, but in the end he stared sullenly at the wall while I turned the clippers on and off, and put first my vibrating hand, then the actual clippers against his halter at his poll.

With babies you have to be quick to reward good behavior, because your window of opportunity will close quickly. I took my hand off his poll, gave him a little pat and unsnapped the rope. He glanced at me in surprise..."You mean I'm done?" Whoopeeee! And away he went!
Posted by SmartAlex at 2:17 PM 2 comments:

Today Mom and I led Copy and Ace out to the paddock. He was being very cranky so I had a firm hold of the cheekpiece of his halter. We got in to the paddock, and he decided to try to bolt, but of course I had a firm hold. So, he decided to "throw a fit and fall back in it." I had such a good hold on him that when he reared up he lost his balance and went down, and I went down on top of him. Like Mom says... "better on top than underneath!" I was so pleased that his nasty, no-holds-barred attempt at getting away ended up in him crashing on his own that the dirt stains on my knees were almost worth it. They've been soaking in soft soap in the office sink for 2 hours, and I'm thinking it's not going to come out. I guess I'll have to keep some Lestoil in my barn bag!
Posted by SmartAlex at 4:24 PM No comments:

First time off the farm

Ace went for his first trailer ride yesterday, and all went well. We tied Copy and left Ace loose, and just drove about 2 miles around the block. He seemed just fine. I didn't hear any fussing back there, and the trailer hauled smoothly.

Afterwards, I took him out of the stall alone, led him around a bit, then tied him to the wall for five minutes. He did call for Copy, but was pretty well behaved. Then we went to visit each of the other horses, and then turned him back out with Copy. We are taking baby steps towards getting him disconnected from his Mom so weaning will be less traumatic.
Posted by SmartAlex at 6:26 PM No comments: 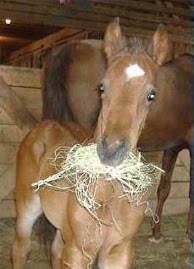 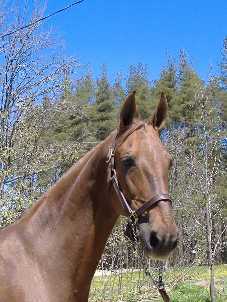 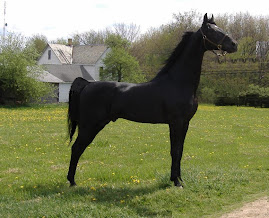